“I don't want my Taxes spent on Trident Killers

We are right to worry about the enormous cost of the Trident nuclear weapons system and to speculate on how the billions squandered could be better used on maintaining public services in towns like Rochdale, but we also need to remember the horrifying effect on us all, if these nuclear weapons of mass destruction were ever to be used. 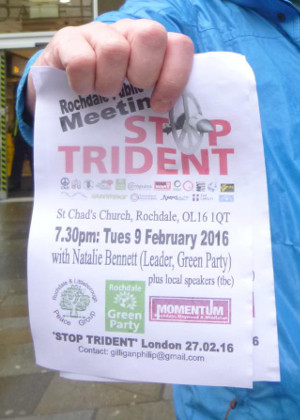 Films like 'When the wind blows' with David Bowie's haunting sound track, 'Threads' or 'The War Game' gave us extremely frightening accounts of the likely realities of mass starvation and nuclear winter, but more recent studies have,perhaps, shown an even more terrifying picture.

In 2013, for example scientists Moyes, Webber and Crowther produced a case study of the direct humanitarian impacts from a single nuclear detonation on Manchester.

They concluded that: “The detonation of a 100kt nuclear warhead above central Manchester would create blast,thermal and electro-magnetic effects killing more than 81,000 people directly, leaving more than 212,000 injured,devastating housing and commercial buildings,destroying vital infrastructure and leaving the local emergency service capacity massively degraded.”

“Even outside the zones of direct damage the effects of the detonation would leave many systems of communication inoperable and people incapable of effective response work.”

This would be indiscriminate destruction on an immoral scale, but the brutal reality is that each of the UK's existing 48 Trident missiles already has eight times the killing power of the atomic bomb dropped on Hiroshima in 1945 and contains the equivalent of 100,000 tons of conventional high explosive.

If used they would kill tens of millions of people.

This is NOT how I want my taxes to be spent and why I and millions of others support the campaign to Stop Trident.